The English tradition of fox hunting on horseback started in Australia during the 1830s. The Melbourne Hunt Club was established in1853, making it the oldest continuously operating Hunt club in Victoria, as it remained operational in a reduced capacity during the two world wars. The club has a fascinating history of ‘elite’ Melbourne society intermingling with local farming communities. 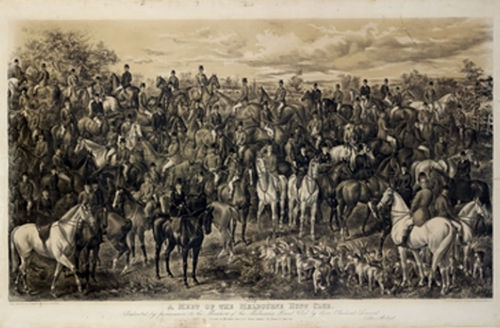 The first Master of the hounds was George Watson, from the I.Y.U property in Pakenham. Watson and his American business partner Cyrus Hewitt, acquired Cobb & Co coaches, he was a committee member of the Victoria Racing Club owning horses that won the Derby and the Oaks at Flemington. Watson was a great rider, a world-renowned race starter, starting the Melbourne Cup on many occasions, and the founder of the Melbourne Hunt Club in 1853. Most of the Melbourne Hunt Hounds can be traced back to the original imports that Watson had brought out from his family’s pack in county Carlow, Ireland, during the late 1800s.

Initially they were first housed at Kirks Bazar which he had just leased, which was a busy sales yard north side of the Bourke St hill between Elizabeth St and Queen St, now Hardware Lane.  (Racing.com) As Melbourne became more densely populated the hounds were moved to St Kilda, Caulfield, then Deer Park, and by the 1870s, Melbourne’s wealthy families like the Chirnside’s and the Clarkes, indulged in the hunt as a prestigious leisure activity. The club needed larger areas to stable members’ horses and to maintain the hounds so they were relocated to what is now the Huntingdale Golf Course, and stables and kennelling were built on property there with the club actively hunting in the surrounding area in Oakleigh and the area that was to become known as Huntingdale. 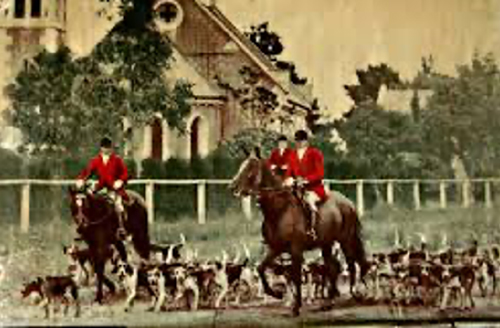 A Meet at the Dingley church during the 1920s

By the 1920s Oakleigh’s larger farms were beginning to disappear and Cranbourne was decided upon as the new home. By the time the club moved to Cranbourne, the hunt already had a presence in the district from bringing horses and hounds by train to disembark at Hallam station for a day’s hunting in the surrounding area. There was eventually a network of properties that would make their land available to the hunt which allowed them to erect special fences throughout their property which horses could jump safely and because of this the Melbourne Hunt Club also adopted parts of Cranbourne culture as its own, the club even undertaking fundraising to assist in the building of a new Public Hall in Cranbourne.

The clubhouse at Cranbourne was a beautiful place to enjoy afternoon tea when the hunts were over, as well as being the scene of many social engagements for the local community. There were dance nights, club dinners and in the latter part of the century the club members hosted Trivia nights, Irish nights, Rock and Roll nights and many other functions which club members and local residents attended enjoying themselves immensely.

The Club House, Hound Lodges and Staff Cottages were located at the end of a long winding driveway through the front paddock. In this fifty plus acres of paddock the hounds were exercised on foot and by horse back, pony club riders would often attend children’s hunts and hunter training days. From the 1960s Polo matches were often held in the simply named Polo paddock, and the Melbourne One Day Event committee held Horse Trials on the club property also in the huge front paddock where there were a variety of different jumps varying from hedges, hunt panels, New Zealand wire panels and a water jump feature through the old quarry where most of the bricks used to make the buildings in Cranbourne had once been made.

Racing was also heavily connected to the Melbourne hunt club. There was a dedicated steeplechase course through the front paddock, and for many years the Melbourne Hunt Point to Point Race was a feature in the Victorian Racing Calendar. This race meet was a focal point for the local community and was an eagerly anticipated event hosting prominent race callers and bookies as well as the racing and local community gathering for one great days outing

All of the buildings on the property were architecturally designed and excellently constructed.  The stables, with a wide brick lined corridor and high hay loft above the horse stalls, were used to film a movie in the 1980s and it was during this movie shoot the stables were unintentionally nearly burnt down. The Hound Kennels were equally as well made and impressive as the rest of the buildings, the floorplan being based on the tried and trusted floorplans of English kennel yards. These included Night Lodges, Undercover Drafting or Draw Yards with brick flooring throughout. The outdoor area had large outdoor grass yards for the hounds to live happily and surprisingly quietly for such a large number of dogs housed together. The success of the club’s time at Cranbourne was aided by the daily exercise and mental stimulation the hounds received and the exemplary husbandry which saw the night lodges being meticulously hosed out and disinfected daily.  The added benefit of the layout and floor plan design of the kennels ensured the huge day yards were deliberately situated facing away from oncoming visitors and traffic meaning the hounds could see cows and pasture but not visitors and passing foot traffic, allowing them to be relaxed and quiet on a day to day basis. 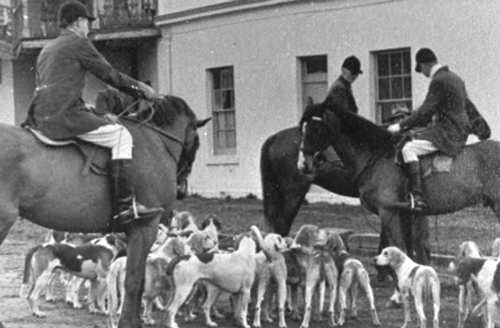 Outside the Berwick Inn early 1950s

A curious and compatible relationship developed between the local Cranbourne Melbourne Hunt members and hunt members travelling from Melbourne for the shared camaraderie and love of riding across the countryside. The Club was a very established part of Cranbourne’s identity. There are many memories held by locals who had various involvements with the club, either as members of the Hunt, workers at the hunt complex or as children from nearby properties who grew up playing at the grounds. The Hunt Club was an integral part of Cranbourne for many years and when the property was sold in the 1980s and relocated to Pakenham there were many in the local community that lamented the loss of such an important part of the area’s history and community spirit. The name has been retained and the Hunt Club Estate Is home to approximately 10,000 people consisting of a major shopping centre, community facilities, both primary and secondary schools, integrated wetland systems and a retirement village.